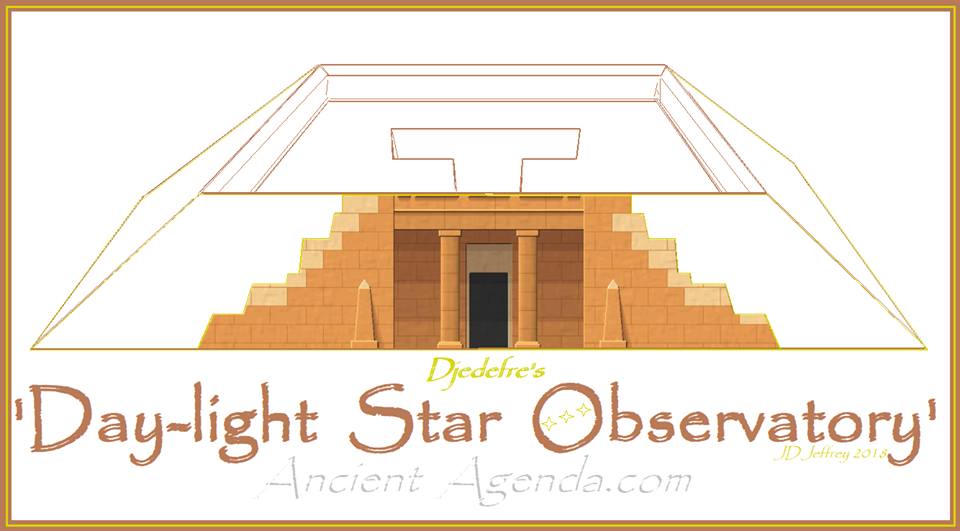 Across the expanse of our great globe, we find various different monuments in pyramidal form.

When it comes to Giza, the land of the forgotten, we find all three of these typical type pyramids.

We find Saqarra's Djoser pyramid edified as a Ziggurat pyramid.

Eight miles to the north we locate the Tetrahedron pyramids nown as Cheops, Khafre and Menkaure.

Five miles further to the north, we find situated on top of a hill, the pyramid known as Djedefre. Little is known in regards to this now decimated pyramidal structure.

Through the eyes of Ancient Agenda's CSI History, following the clues of our Grandcestors..we offer a different view..

This pyramid's archaic title was given as - "Djedefre's Starry Sky".

Could this be the first clue..? 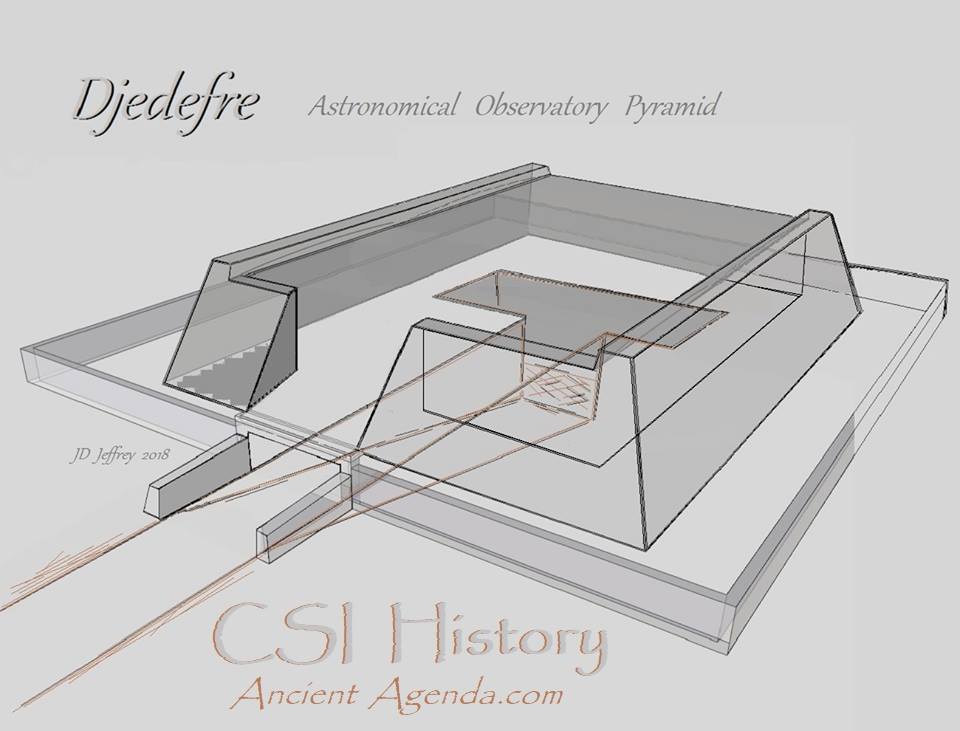 Djedefre dug a pit 21m x 9m and 20m deep in the natural mound. A ramp was created at an angle of 22º35' and the chambers and access passage were built within the pit and on the ramp.

Once the 'inner chambers' were finished, the pit and ramp were filled in and the pyramid built over the top. This allowed the chambers to be made without tunneling, and avoided the structural complications of making chambers within the body of the pyramid itself. He also reverted to an earlier style of construction by creating a rectangular enclosure wall oriented north-south, similar to those of Djoser and Sekhemkhet."

This unique structure of Djedefre, also known as the pyramid of Zawyet El-Aryan, could very well have been built as an Inverted Solar Observatory.

Djedefre's temple at Abu Rawash does not appear to have been constructed as a full pyramid. Yes it had walls, but it wasn't enclosed as the traditional pyramid found at Giza. From studying pyramids world wide, knowing the Starry-Sky pyramid was constructed and built 400 feet 'above' the plateau, plus it's orientation, construct the variable clues offered that it was an intentional 'open-air observatory' which allows stars to be seen during the 'day time' in arid climate zones.

Our ancient historians termed Djedefre's pyramid with the designation ‘H/R’, as it is situated as Giza's highest pyra-temple.

In ancient Egypt, an astronomer once asked an architect:

“If you were an astronomer, how would you start building an astronomical observatory, which would be perfectly in line with a meridian circle, from which one could observe and teach young people how to determine the transit of all of the stars in the heavens?”

In the Morning Briefing of Sunday, January 25, 2004, Lyndon LaRouche answered that question by saying: “You’d build a deep pit, a deep well, and if the well is narrowly fixed, you can actually see stars during the daytime, and particularly in areas which are fairly arid. And that’s when a lot of astronomy was done. They had the nighttime sky, which they were able to survey this way, and also the daytime sky. Motions of the planets and so forth, they could see, in the dusk.”

Two things were immediately derived from this first observation passage. One is that the same circumpolar stars would come across the meridian at regular intervals of time and would draw small circles around the Celestial North Pole. Secondly, this permitted the observer to map the precise timing of stars at their upper or lower culmination, which could be calculated by clepsydras (water clocks).

Thus was established, in Egypt, the precise study of marking regular angular periodicity of the heavenly bodies, and the variations in periodicity for longer periods of time. The only way to establish such a universal determination was to have two fixed points around which everything else moved: one on earth, and one in the heavens. Once these two points were fixed in stone, the building of the pyramid could begin." 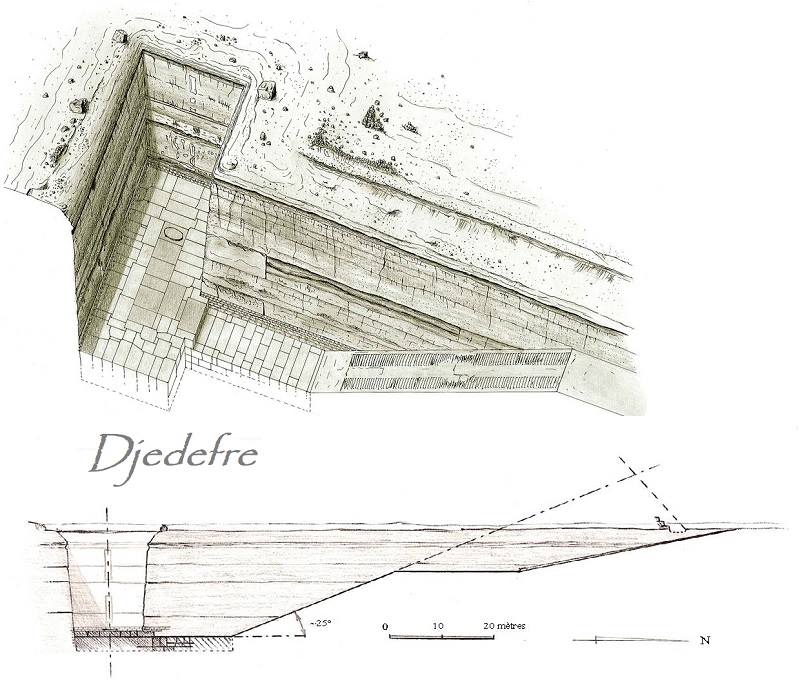 To fix a location of Giza, Djedefre's inverted pyramid was establised 400 feet above the desert plateau giving direction to 'line of sight' trajectory thereby constituting the greater-Giza ground plan lay-out.

It should be established 13 breaks down as 1+3=4 determining Djedefre's chosen location signaling the 400 foot mountain base height. The extensive 'causeway' measured at 1,705 metres gives the sequence in numbers of 1+7+5=13. These numbers alone verify it is part of our Grandcestors Codex 13 message, however with added vindication, there are also two smaller adjacent 'pit' astrological stations similiar to Djedefre exactly 1300 metres apart.

(This video from 20 to 21 minutes connects the 3 locations including Djedefre at 1300 metres each) https://youtu.be/_fVvN4_EjX0

In megalithic form, our Grandcestors inscribed their message of the Starry -Sky, the Life Force in which we all belong, from whence we came ..all shall return.

From our ancients, we were bestowed the symbol of the Tau, which can also be found the world over and not specified specifically to Egypt.

Djedefre's pyramid is constructed in the shape of this Life-giving Force, to remind us of the Tau observation ;

Life can be found within daylight hours as well as the night lighted view to who we are. We are as many as the stars, and we are not separate..

..only together do WE shine! 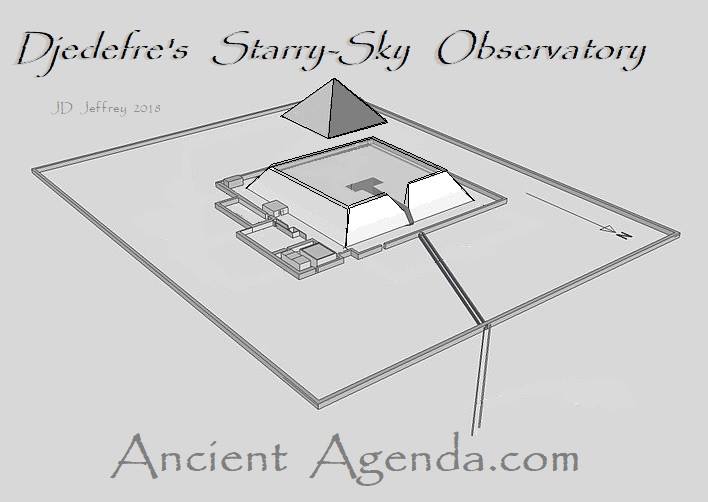