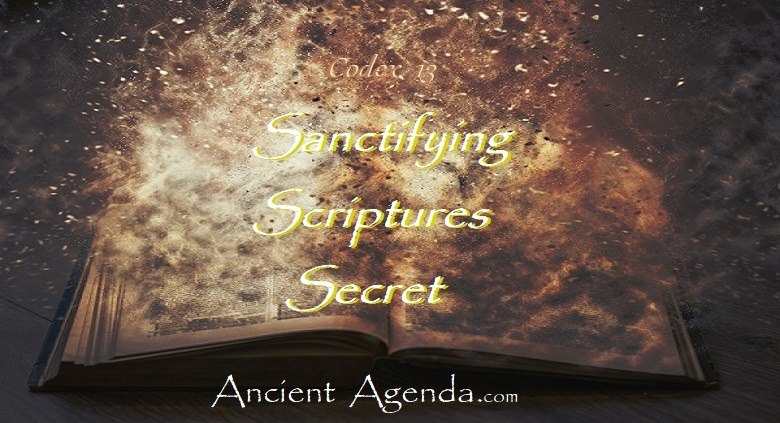 Most shy away from the biblical part of history for reasons of religious beleifs, complexities and misunderstanding. Although there is no simplified understanding to the bible(s), there is a code hidden that explains what religions have not disclosed.. for those who have been given eyes for which to see.

This Codex 13 was understood through research not only from the monuments but also the various religious scriptures offererd. Scripture often mentions archaic monuments as Altars, Temples and Tabernackles - it's the descriptive details that give them away.

Together they are combined as 13 is cleverly hidden in tales of scripture..tales of monumental proportions.

The Gene-assisted secret of Adam is he is the first human to procreate and at 130 years of age did this with Eve giving birth to Cain.

The thirteen sons of David which were born when he went to Jerusalem.

It is the thirteenth day of the twelfth month, named Adar, that the people celebrated the victory of Judas Maccabaeus on the army of Nicanor to Adasa.

A decree of Jew extermination was decided by Haman during a convocation addressed to scribes the thirteenth day of the first month.

The image of the creature kneeling ahead the Throne of God, the Holy Trinity Father, Son and Holy Spirit, is symbolized by the number 13: the 1 ahead 3.

Revelation, chapter 13 gives the description of the beast John saw rising up out of the sea.

According to an article by Chuck Missler of Koinoia House (http://www.khouse.org) there are 33 titles in the Old Testament for the antiChrist, while there are 13 in the New Testament. An example is found in Daniel 9:26, "The Prince That Shall Come."

The word "leaven," which is symbolic of sin, appears 13 times in the New Testament.

In Genesis 17:25 Ishmael is circumcised at the age of thirteen which is when God made the promise to Abraham;

Genesis 14: 4 Sodom rebelled after 13 years of servitude to Chedorlaomer king of Elam (Babylon)

Jeremiah starts his ministry in the 13th year of Josiah (Jeremiah 1:2). Jeremiah may have been 13 years old when his ministry started.

The Dragon, which is symbolic of Satan, is mentioned 13 times in the Book of Revelation.

There are 13 major famines that occurred in the Bible from Genesis 12:10 during Abraham’s time to Acts 11:28 during the period of the early church.

In Romans chapter 1 the 13th characteristic of evil attributes is that mankind is a hater of God (Rom 1:30).

Deuteronomy 13 speaks about pagan and false Gods that will lead people into idolatry and thus, the severe judgment of God.

Some traditions hold that Judas Iscariot, the one who would betray Christ, was the 13th one seated at the table of the Last Supper.

The name Judas Iscariot incidentally is 13 letters, who was considered to be JC's favored.

The 13th chapter of the Book of Revelation is reserved for Satan and the beast (the Anti-Christ).

Nimrod, the mighty hunter, was of the 13th generation of Ham.

The Valley of Hinnom is mentioned thirteen times in Scripture and is always related to evil pagan practices.

The "3 and 10 phobia" mentioned above is significant, for the number 13 is representative of Satan's attempt to mimic God and the Holy Trinity. The number 10 is the number of "the perfection of Divine order." According to Bullinger, 10 represents "the completeness of order, marking the entire round of anything...It implies that nothing is wanting; that the number and order are perfect; that the whole cycle is complete."

The Bible identifies an additional 13 Gospels not included in the Bible that are to be read in accordance to scripture..

Luke 16: 1-13 equates a story of a certain rich man's servant whom  who calls lord's debtor to fix a debt.

The Torah states the father of Moses lived 137 years.

Ishmael and Levi are also said to have lived 137 years.

Levi originated the Tribe of Levi.

The gematria value of the phrase “HaCohen V'HaLevi”, meaning “The Cohen and the Levites” in Hebrew is also 137.

There are many more..however there is the most interesting book of Revelation intriguing tale of God's Two Witnesses whom lay clothed in sack-cloth for 1260 days..then lay dead in the streets for another 3.5 days. 1260+3.5 is 1263.5..which is obviously a Metric number and can be 'rounded-up' from 1263.5 to 1300

Scripture also defines in detail astrological equations verified by the archaic monuments detailed in Codex 13. Long have we been led to believe it is a salvation practice.

Salvation is what the referred good-book does in fact do within it's own personal guidelines, however salvation belongs only to the heart and soul of truth.

Enoch and Ezeqeel reveal as examples the many astrological correlations deduced from scripture.

The story of Enoch as an astrological reference is the easiest understood.

Enoch the seventh seed from Adam. Enoch stopped to ponder his life at thirty years.

Had his first child at the age of sixty five.

At age three hundred and sixty five God took Enoch..he did not die.

Had his first child at 65 - 65 days from the beginning of the year is when you SOW the seeds in the field.

At 300 God talked to Enoch - 300 days from the beginning of year is HARVEST time.

God took Enoch at age 365 meaning the year STARTS OVER and does not die.

Ezeqeel is referring to our Sun and the eight planets.. "wheels within wheels"

This constructs the motions of the cosmos.

the Zodiac Houses around our Solar System

Ezeqeel's 'wheels within wheels' is our moon circling our planet, while our planet circles the Sun. As our solar system circles the galactic arm, we view our 13 celestial zodiac symbols making the four Cherubs who's faces turned each way the wheels turned, to be our four Pole Stars that intermittently change during processions warble of the 26,000 year Orion Transit.

This transit is specifically correlated in the gospel of Revelation.

These are the astronomical observations of Enoch and Ezeqeel..referred through scripture as 'the Watchers'.

Diciphering scripture dictates Adam at the age of 130 had Cain first and Abel was born one year later.

Scriptures eludes to Adam & Eve having a total of 56 children of both boys and girls.

Fifty-eight is a significant number as 5+8 equals 13.

he was cast away to roam the Earth also stating there were others whom might bring Cain harm hence his mark.

Religions state that in thier purity incest issues was not yet affecting humanties population.

Allegorically we are given two ages as Cain born at Adam's age of 130 years and Abel born one years after is 13x2 =26. The 26,000 year Orion cylce implied by Adam as Ist human to procreate at age of 130 revealing the coded 13,000 year halfway point of Orion's transit.

It should also be noted if you venture into a Christian church, you will find the thirteen 'stations' of JC's crucifixion period.

Six stations each flank either side to the church hall in precessioin to the altar,

with the 13th station positioned above the church's cherished Altar.

Regardless of religious interpretaion, scripture is allegorical and steeped in cycles, sacred geometry (hence the specific number equations) hiding an astronomical message.

The number 137 comes up quite often in the Torah.

It is the most common age for the biblical characters. Abraham is 137 years old when he binds his son Isaac in the Torah Portion of Vayeira. When you understand Kabbalah, you realize this relates directly to the idea of an “electron absorbing a photon” or desire connecting to Light. We must bind our ego (Isaac), the negative desire in order to connect to the hidden, concealed realm of Light (Abraham). That’s what the story of Abraham binding his son Isaac is all about.

Moses’ father lived to 137, according to the Torah.

Ishmael lived to 137, according to the Torah.

Levi lived to 137, according to the Torah. Levi is the seed of the Tribe of Levi.

What is also amazing is that the phrase “The Cohen & the Levites” has the numerical value of 137.

Eve was taken from Adam's side not to be in front or behind, but by his side - to be EQUAL.

We are all made to be equal, religion doesnt want us to know this -people need to stop dividing..we are worthless in division.

No one has all the answers or has time to look at all the questions, but that black book everyone so dearly covets... God made us in his image and likeness - that means we have his ability to do and think as he does. We are the gods of the now, no one is coming to save us, no one but us. To be a god you must be pure love, which is a Samaritan virtue - when the world learns this, only then will they lay down arms and do for each other before doing for themselves.

Its the true way.

It's time we all know the truth in this extensive Codex revealing mankind's history as we share a taste of what's derived from reading all 3 denominations scripture books, dead sea scrolls plus a host of other religious material combined with corresponding explanations to Earth's archaic monuments.

Freely yours to explore as this knowledge is your birth-right, our history of uncovered truth.

This is UNISON Quest ! 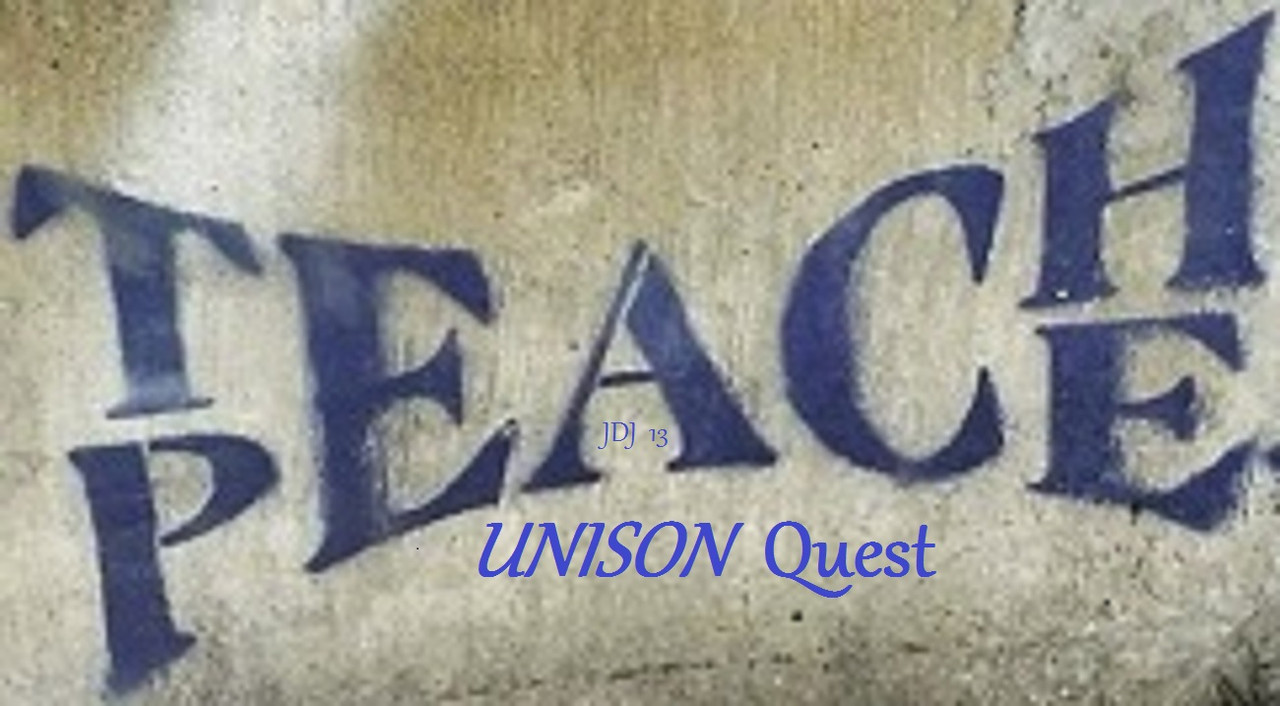