History speaks of a lost book of knowledge from a golden age of wisdom now forgotten.

The undisclosed history of Babylon offers an advanced archaic Key, known today as Cheops. This key operates a hidden codex once hidden in the passages of time now entered unlocking a lost history of an advanced race not found anywhere but amongst Earth's misunderstood archaic monuments. Through examining the Great Pyramid as it witnesses history repeated, our technological age presents a new enlightening truth now awakening through a 'codexed correlation causation creating confirmation'.

As we examine the language the Great Witness Speaks, we uncover from the shadows a timeless message sent to those awakened and aware.

A message of Light by our very Grandcestors concieved in the annals of 'before', born into the 'now'.

Our clever ancestors understood language constantly changes but math, geometry and astronomy never changes, just masterfully evolves. As math is a language unto it's own, it also never deceives, only confirms - especially when astronomy is concerned. Math has supplied humanity the understanding of the moon and stars which helps us to progress knowing the seasonal transitions also constituting the advancement into the technological age. Knowing humanity is based as an extremely curious species, our prior ancestors used natural progression to embelish a Codexed memory within and upon Earth's archaic monuments.

The Great Pyramid, arguably the greatest feat of ancient achitecture explains the correlation in mathematics providing causation in understanding to the confirmation of the message created. Two sets of numbers are extensively correlated of this monolithic statement in stone, giving one confirmation to the Great Pyramid's antiquated message. Imperial and Metric are vividly expelled constituting one and the same.

The Great Pyramid’s given base side length is 756 feet Imperial, while all ‘four base side’s in linear length’ provide a very near Metric equivalence of the whole ‘base number sum’ to 1 Kilometre, conveying the builders knowledge of both Imperial and Metric math.

Imperial is for the 'layman' (everyday simple use) while Metric is the math of sciences (higher computations) therefore both are incorporated into Giza's Great Pyramid structure as well as astronomic calculations (AU). A message over time has been sent and our Grandcestors used every available language from the sciences as they knew what we know - and more!

Placed within this desert designated triangular Pandora's Box reveals revelations once opened that lead to a holy grail of wisdom confirming an archaic message encoded by a mystifying advanced society not recognized in today's history books. 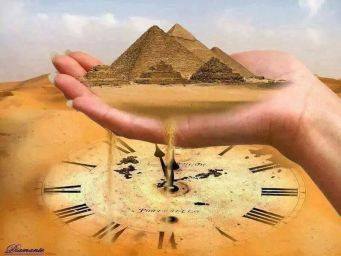 The ‘original entrance’ is located on the North face, at the 17th course of stone 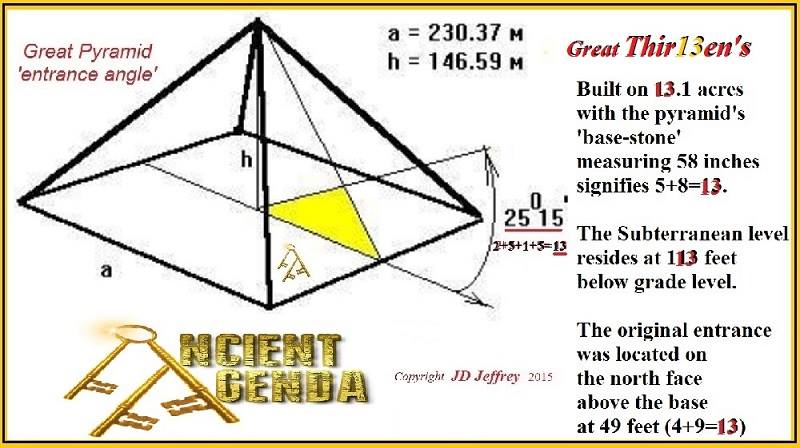 There is a 'line' etched and scribed the entire length of the Grand Gallery at a height of 7 foot 6 inches. 7+6=13 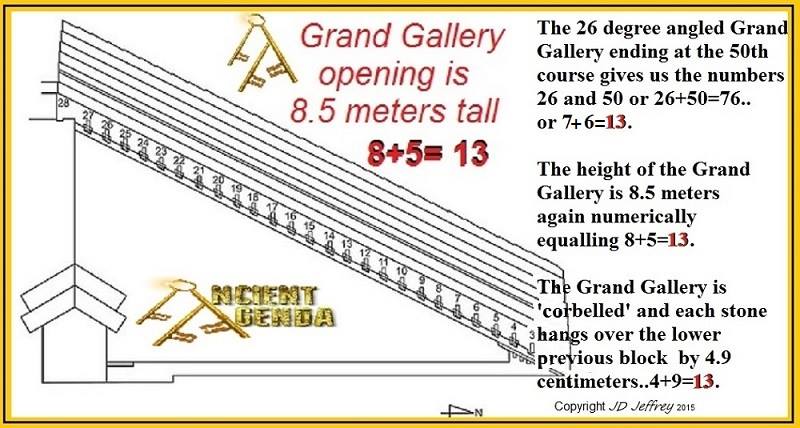 The Kings Chamber Sarcophagus is situated at 1/3rd ratio to the room. 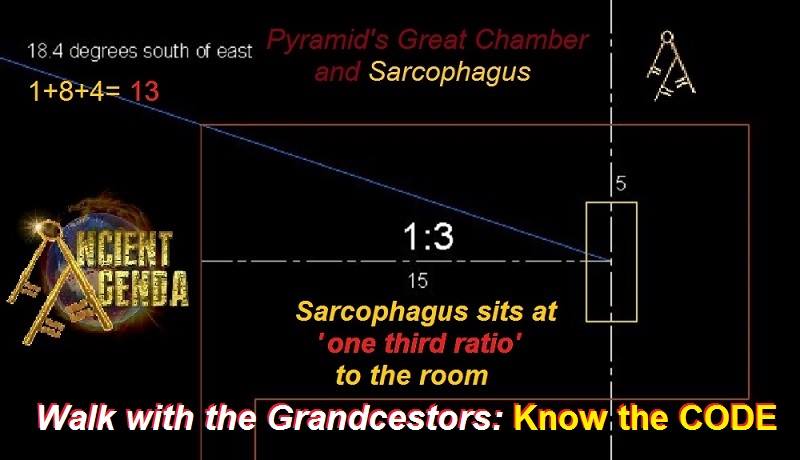 Length of the Kings Chamber 'southern' shaft (according to Gatttenbrink's robot exploration) is 175 feet. 1+7+5=13

According to the research of Scott Creighton, allowing the two Northern shafts of the King and Queens Chamber's to extend exiting the Great Pyramid, they will cross over at precisely 6.5 degress. 6.5 x 2=13. 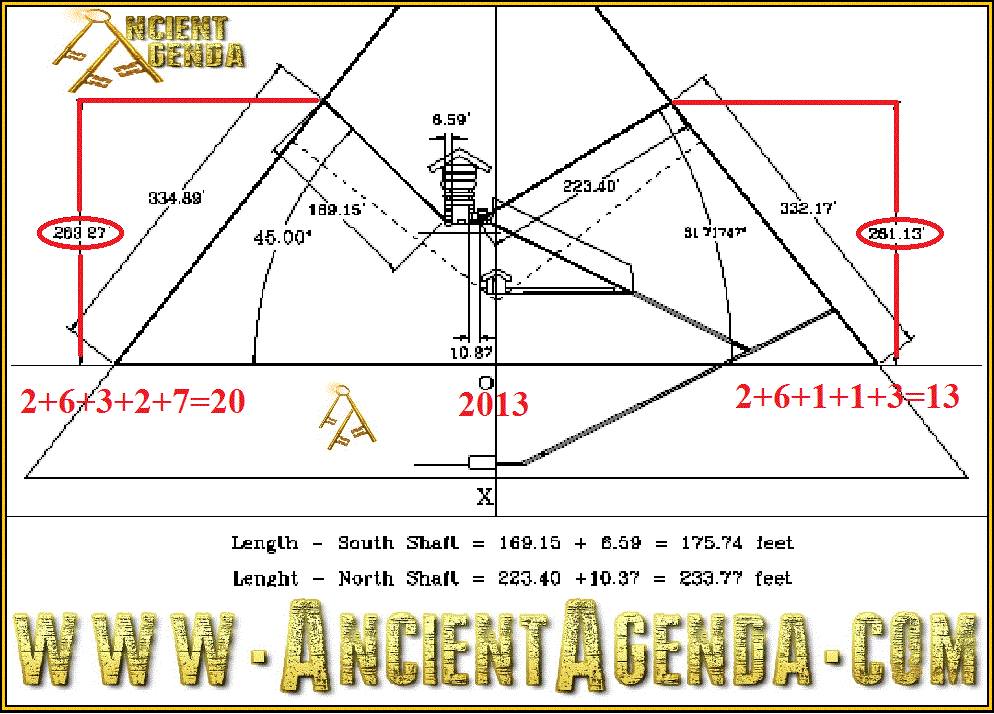 History defines the Great Pyramid is mostly made up of monolithic sandstone and limestone blocks;

however there were approximately 148 Granite stones brought from the Aswan quarry to build the Great Pyramid's interior, and in actuality only 130 Granite stone can be seen.

Although the Nile river fluctuates, it has a natural height  where the Great Pyramid resides 130 feet above the Nile. 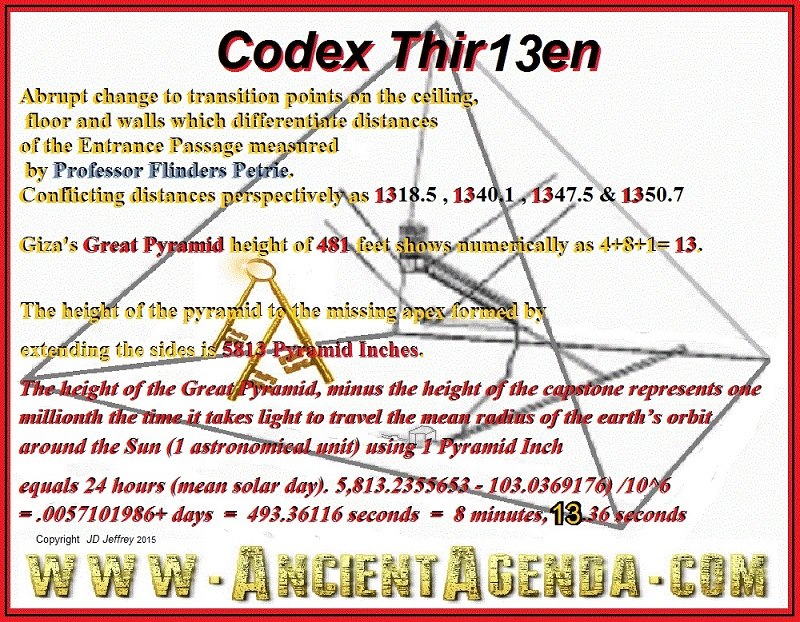 Upon entering the Great Witness, abrupt changes of smooth to rough rock registering transition points on the ceiling, floor and walls differentiate distances of the ‘entrance passage’ measured by Professor Flinders Petrie. Conflicting distances are perspectively computated and listed as 1318.5 , 1340.1 , 1347.5 & 1350.7

The height of the pyramid to the missing apex formed by extending the sides equals 5813 Pyramid Inches.

Within the height of the Great Pyramid the Codex 13 is unmistakable from simple basic math, to higher calculations and progressive computations. By using the geometrical expression of ‘Circling the Square’ with a doubled height and using the Pythagorean ‘reduction system’, we find the number 13.

The Great Pyramid base is given at 756 feet in it's equation. By using basic math, the number 700 transfers as a whole number.

The Great Witness has made no mistake in the message conveyed continually exuding in startling verification the numerical 13 . As one examines all math equations history has catalogued, this article is but a sample of the abundant 13’s provided by this timeless witness as it speaks it’s codexed message - it verifies intent. 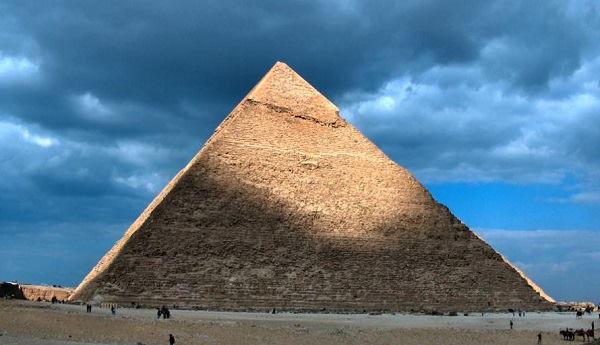 Orion Transit count and exactly the same number stiplified in the Great Pyramid's 'total containment of cubic meters' establishing a rounded number to Orion’s completed orbital transition of the specified number established as 2.59.

It’s original name translates as: “Divine is the Pyramid of Mykerinos” 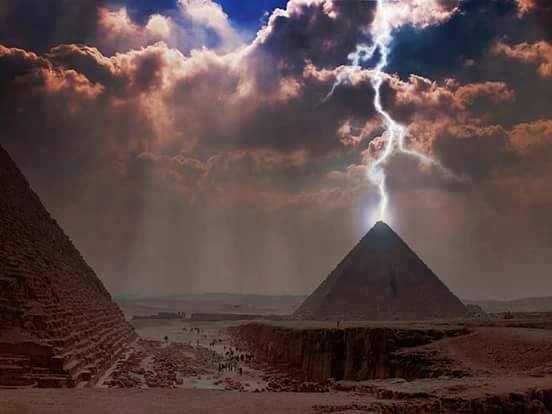 These numbers continue to appear laid out across Giza to explain this dynastic code left by our Elders of antiquity.

By utilizing the numerical 13 codex we find that Saqquara' Djoser's pyra-temples and Djedefre's are adjacent to Giza's 3 pyramids and the over all distance is equated at 13.85 Miles. The first set of numbers is a given at 13 and then the 5+8 =13.

The two 13's equal the Platonic Tranist of 26,000 years. (this number is given many times at Giza) Saqqara, Giza & Djedefre are the actual Orion belt star markers of procession. Orion's Belt stars originate at 58 degrees. 5+8 =13 equivalent distances from Giza to Djedefre and Djoser.

Djedefre's pyramid is the Belt Star in Orion known as Mintaka, the Giza Pyramid's reflect Alnilam and Djoser's pyramid is Alnitak disclosing Orion's three Belt Stars constructed and located in Egypt detailing the math code of 13 dictated by Orion. 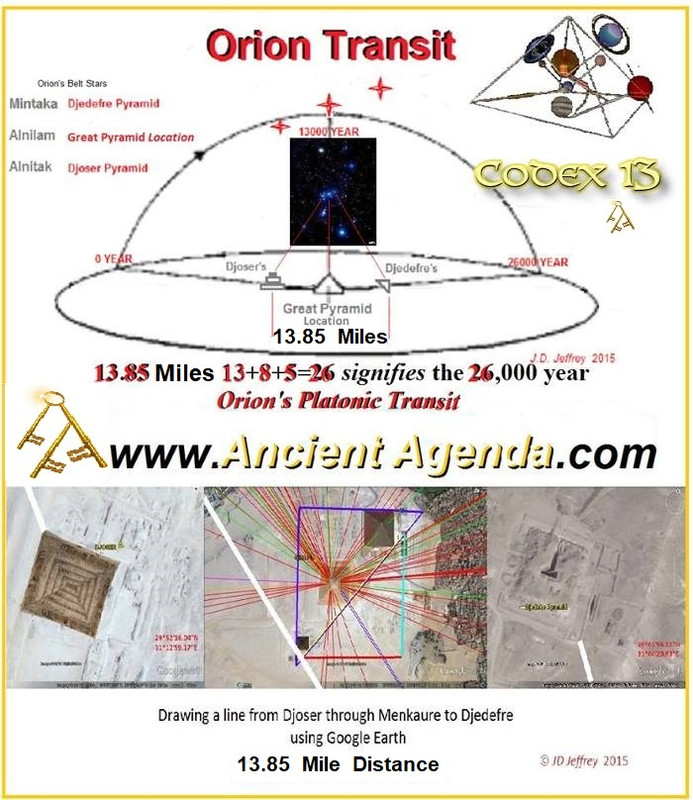 Understanding the Great Pyramid includes surveying it's math, geometry and the astronomy it exponentiates.

This connection to Orion's 13000 year count with the Great Pyramid Volume itself is 2.595 million cubic meters is explaining the length of the Platonic Year and Orion's 25,920 year transit. The volume of the three pyramids is 2.59, 2.21 and 0.235 million cubic meters for Khufu, Khafra and Menkaure respectively. By adding the total cubic meters of all three pyramid's in volume as in linear example such as 2592210235 then defining into years as 25,922.10235 - we astronomically correlate an exact count to the Orion Transit Platonic Year. 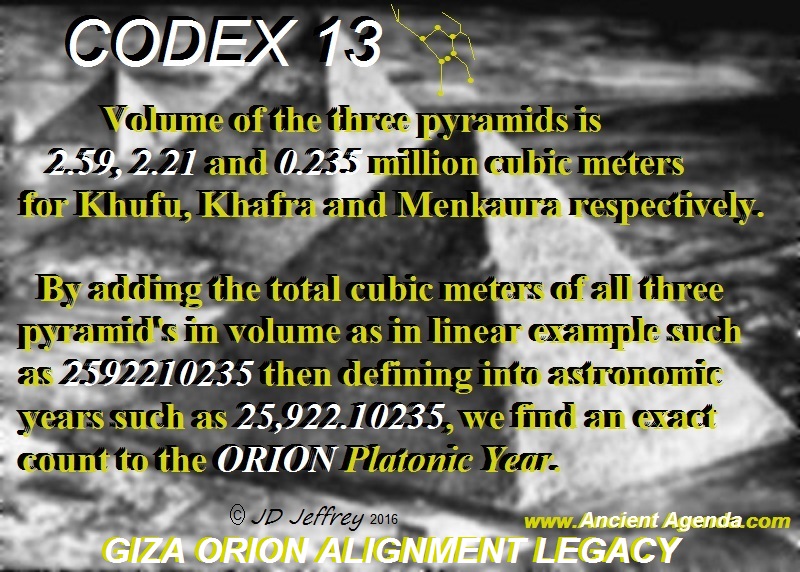 The ancients were able to incorporate the 13 Codex within the specified individual land parcels and structural dimensions. Remaining open to the thought process that our ancestors commanded what we use today is exemplified through this numerical message repeated consistently across the Giza plateau.

The original architects created these monuments using a specific number as their personal ‘signature’ with reference to Giza as the main source. Consecutively at each archaic monument the number 13 inexplicity surfaces showing it to be no accident; and then there are the other other anomolies such as Light values and advanced Harmonics signifying this Codex is sequential.

The builders were aware of the numerical intent incorporating it to contribute the astrological answer with Imperial math as man's math (the math of Earth) and Metric is the math of the God's (movements of the celestial planets in the Heavens..a higher knowledge) instituting the Great Witness is built incorporating Pi mathematics which has been verified by various professional mathematiicans.

What hasn’t been noticed (until now) is that the Pyramid’s Eight sides equal Pi. 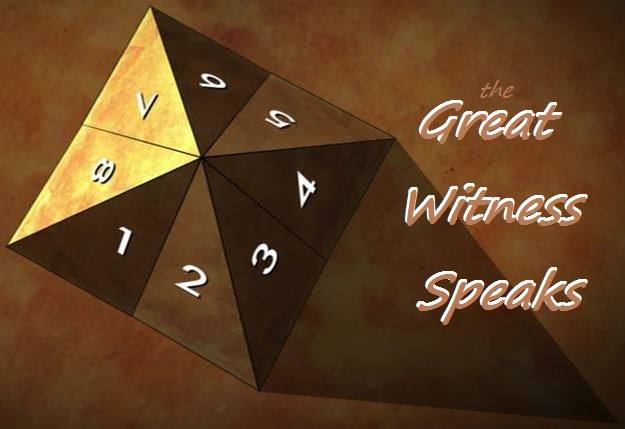 Pi mathematics is 3.14 and can be construed as 3+1+4 = 8 releasing another of the Great Witnesses long held time evading secrets.

The word pyramid is composed of the Greek words 'pyra' meaning fire, light, or visible, and the word 'midos' meaning measures. ‘Measures of Light’. Giza’s Great Pyramid makes use of Sunlight twice a year for less than a half hour at each time showing us an advanced message incorporated in light contributing knowledge of advanced math, geometry and astrological wisdom. Phenomonal measures by todays standards.

The bottom line is that from design to construction and placement we find that our Grancestors had every bit of our technological skill and knowledge; and in some aspects of their process, a further education than what we today accept. 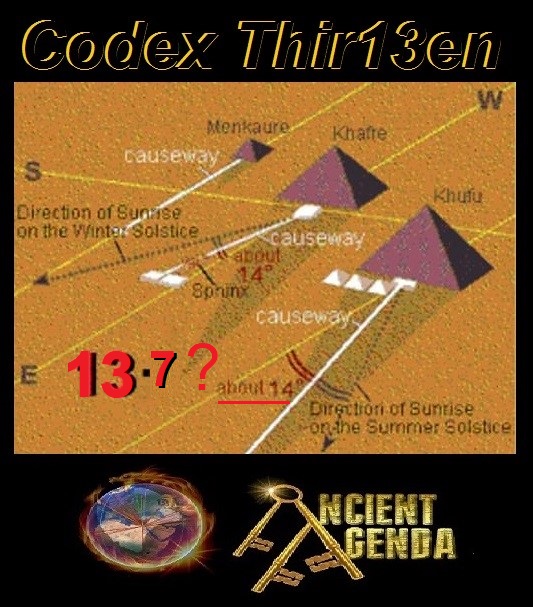 This research provides irrefutable proof this is truth and ‘we’ Earthlings are the ascending survivors from that parent civilization whom left this knowledge coded in Earths archaic monuments so when we returned to the electronic age - the technological system, we could understand and know the truth to who we are, where we came from and where in Unison we are going as a global collective humanity.

Long is the pathway of knowledge to the door of our Grandcestors wisdom.

A road less traveled to be sure..but worth every precious second of the journey.

This is our heritage, left by OUR ancestors; this unique book of antiquity written upon Mother Earth's face exclaims now is the time to turn a Key to our once lost history as The Great W1tn3ss is silent no more!

Some may refer to this as a Holy Grail of history, the myth come alive.

If the myth is truth and their is a Babylon Codex..with today's technology - Would WE  be able to decipher the hidden code to extract the wisdom left to a future civilization.. ..for the use of OUR generation..?

“According to Pythagoras, the science of numbers was the basis for all things;

13 is the most enigmatic of all numbers, as it is the number of transformation.” 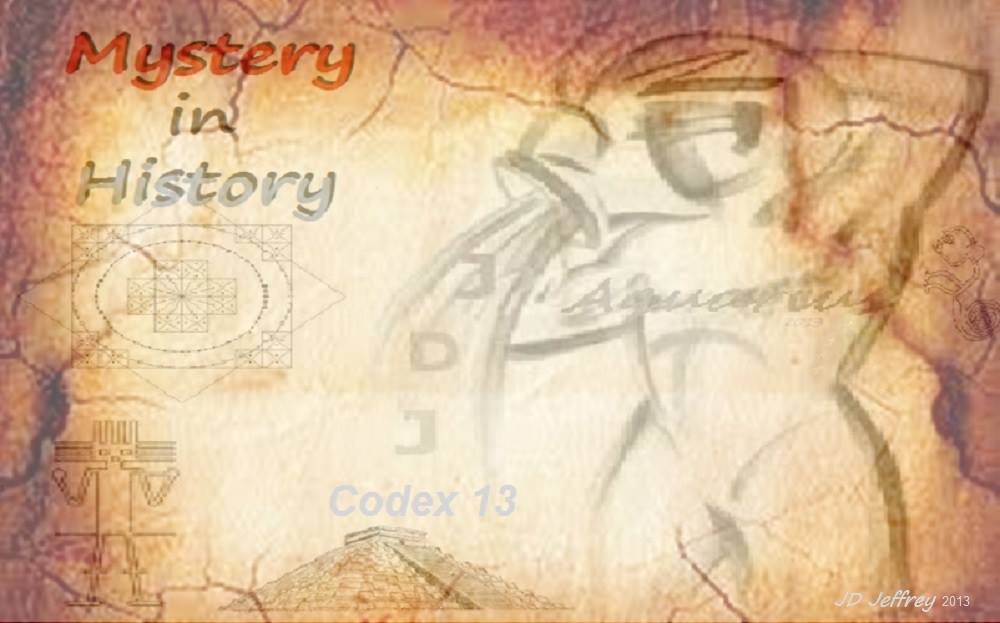